Here's another example of a card McGill seems to have liked enough to issue with four (that I know of) different captions. I'm presuming it was McGill who changed the captions ... or was it Inter-Art who did this? 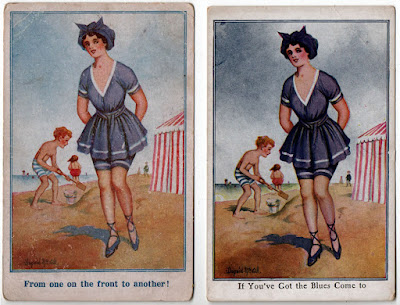 As can be seen three of the cards are puns on the word 'front' which in this case has three different meanings :
I am unsure which of the captions came first. One of the cards was posted in 1919. The postmarks on two are unreadable and the other is unposted.
Another point of interest is that the "This front has more attractions..." version has been printed on very flimsy, albeit smooth, paper while the others are the usual thick card.

When you have collected a few thousand McGill cards you begin to get a feel for which publisher's cards are the more difficult to find. Also, which numerical sequences of cards do not turn up very often.

With McGill's cards for D. Constance Ltd. it is the cards published in 1940 that are more difficult to locate. These are in the 1000 - 1199 number range. This is because the Constance premises at 3-4 Ivy Lane, London EC4 were bombed on the night of 29th December 1940 by the German Luftwaffe.

According to Elfreda Buckland in her book about McGill Joseph Asher made a claim for the damages to the Ivy Lane property which included the loss of 101 original McGill drawings (for which he was awarded £126.12s) and 6000 cards which were in stock.

It seems that McGill redrew some of these lost originals as many Constance cards from the early sequence were republished after the war. (See some of my previous posts which show the difference between the original and redrawn card).

The cards which were drawn specifically about the war - military, blackouts, Hitler themes - were not republished as they were now irrelevant thus ensuring they are now quite rare.

However even rarer than the cards mentioned above are the Constance cards in the sequence 1200 - 1299. It finally clicked with me that not only had I not got any in that number sequence but I didn't recall seeing any. Since I started collecting I have always taken details of every McGill card I came across in an attempt to build up some sort of catalogue but I only had one solitary entry in the 1200 range.

And this is the card:

I then realised that I already had this card but with a different number and the image was slightly different. Here is the other card:

Why was this different and where were all the other cards in the 1200 sequence ?

I was speaking to McGill collector and biographer Bernard Crossley and asked him about the absence of any cards in the 1200s and his simple answer was that there weren't any.

However there is the possibility of one other card existing - numbered 1207 - if it was ever printed and published. One collector has this black and white image (I do not know the story behind this card):

If this number is correct it begs the question about the cards preceding this one in the sequence.

For whatever reason Constance did not carry on numbering their cards where they had left off when they restarted operations in 1944. They had closed down operations due to the 1940 bombing plus the lack of card and ink needed to publish postcards.

When Constance began publishing again they started their sequence at 1300 and these were a series of birthday greetings cards for children.

There is also the theory that the originals destroyed in the 1940 bombing were the complete 1200 to 1299 run which is a very neat explanation as to why they appear to be non-existent.

So, whatever the reason it is very unlikely that any other 1200 cards exist. Should you come across any I'd be very interested to hear about them !

Strangely there are no 1200 cards in the Joseph Asher & Co. numerical sequence either ! Did Asher have a phobia about the 1200s ?! May not as there are A1200s in the other Asher sequence...

Another in this short sequence of early Constance cards that have been redrawn and republished. This card with its rather crude double-entendre was originally published in 1939 or 1940.

It is not straightforward to identify which version of the card was the original. The copies I have of them each carry the same post-war rhyme on the reverse and both have the later 22 Christchurch Road address.

If you take a closer look at the borders to the image, the card on the left with its continuous border is the earlier version (I think) whereas the border of the card on the right has the three stripes at intervals and this design is on later cards. If this is correct it means the cruder, and to my mind inferior, image on the right is the redrawn version !

Yes, I'm still confused about this one !

As if they were alive

This card of a sculpture gallery guard patting a statue's bottom was originally published as a "New Donald McGill Comics" (i.e. no reference to D Constance at all) probably in 1940.

A redrawn version was published with D. Constance Ltd. details and their address given as 22 Christchurch Street.

There is a slight variation to the caption, with the 'Yes' being removed otherwise there are just minor changes to the people and statues although the background colour has been changed from light to dark.

The copy I have is undated but it must be post-war due to the rhyme on the reverse:

The war is won, your £ s. d.
Has helped to bring us victory,
But saving still will pave the way
To that new world, for which we pray.

"KEEP SAVING FOR A RAINY DAY"

Presumably the original was a victim of the 1940 warehouse bombing which necessitated the redrawn image.

Many of the cards McGill drew for D. Constance Ltd. in the late 1930s were later reprinted using the same issue number and caption but with a slightly different image. I have already posted about some of these. The next three posts will focus on other examples.

This first card, which is unsigned, was probably originally published in 1939. I think that the card on the right will be the original version with the caption at the bottom and on the reverse has the rhyme:

Save all you can, please and invest,
To rid us from the Nazipest.
Remember Friend, your £ s. d.
Will pave the way to victory.

The card was later republished as the version on the left. The lady takes up less of the space and is standing on her right leg rather than the left while the gentleman peering round the curtain is slightly smaller too. Her rather strained facial expression remains the same though! My copy has a postmark date of 1953 and the rhyme on the reverse:

"KEEP SAVING FOR A RAINY DAY"
We saved to win the war,
Our efforts must not cease
By saving more and more,
We'll surely win the peace!

The reason for this card having to be redrawn is probably because the original was a victim of the bombing of the Constance warehouse in 1940.

Unsigned, but definitely McGill cards, at first glance they appear to be the same ... but look closer and the differences begin to become apparent. 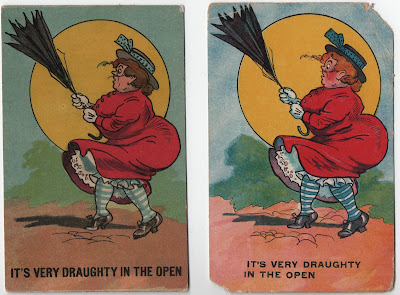 Overall the colours are different, the text uses different fonts, and there are little detail variations such as the spots in the hatband and the stones outlined on the ground. The more you look the more you see. One is a copy of the other, not an exact copy but not far off.

Here are the reverse of the cards: 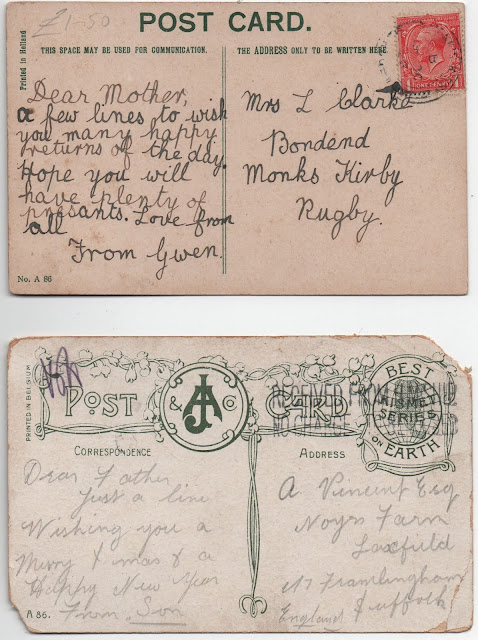 One is very obviously published by Joseph Asher & Co., printed in Belgium (which is slightly unusual) and is numbered A 86. However, the other card is also numbered A 86 but there are no publisher details and is printed in Holland. It is not unusual to find Asher cards which have been printed without publisher details and with only the printing origin and the card number, many of their cards were printed in Holland.

Were these both published by Joseph Asher? My gut reaction is that they were but I can't explain why the image is different on each card. Perhaps I'm wrong and one is a particularly good copy of the Joseph Asher original.

Another possible cause for the differences may be due to the printing processes used by different print companies.

In some previous posts I've shown how McGill's cards produced for the publishers E.S. were copied by another publishing company - E.L.P. Co - in the early 1900s.

I have come across another instance of this happening much later and on a different continent. Green's Souvenirs of Katoomba, New South Wales in Australia have copied several of McGill's cards - having them redrawn with some slight variations by an unknown artist. 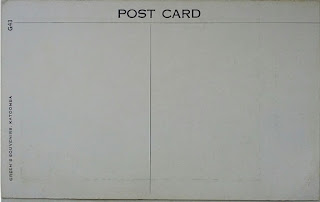 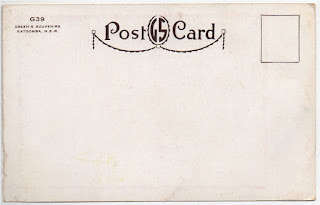 Inter-Art and Constance originals have been used but in what seems a random selection. I have no idea how many they produced but these are the five examples I've found so far. I'm guessing they date from the 1950s as none of them are postmarked.